The bulk of the girls soccer season began with the girls looking for their first win of the season. That came on Tuesday with a 5-1 victory over the host Richfield Spartans. The scoring began in the very first minute of the game by a goal from Richfield. The girls answered back with 5 goals to finish the game on top 5-1. Goals coming from JR Paige Bauer (3), 8th grader Ava Gerten, & JR Sylvia Linkert. Assists by 8th graders Ava Gerten & Danna Garcia-Velazquez. It was a strong showing by the Vikings, who were able to control the majority of the game.

Thursday the girls opened u 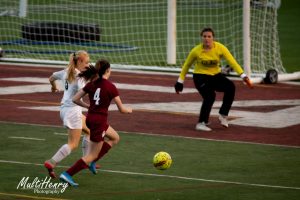 p conference play on the road against a fast & physical Cambridge-Isanti team. The speed and vertical play was illustrated in the very first minute as Cambridge sent a cross into the box and finished nicely by their striker. The Vikings weren’t able to match the pace that Cambridge had that night, especially up top with their forwards, but the girls didn’t stop playing. A great throw from SO Emmie Meyer into the 18 yd box was finished beautifully with one touch by FR Kayla Allison. The Vikings learned a lot about the various styles of play with our youth and gained experience knowing what the weekly & daily work load it takes to compete at Varsity, especially the Mississippi 8 conference. Their goal after Thursday was to persevere and bounce back on Saturday against Zimmerman.

Ending the week’s slate of games the girls opened up a double header with boys soccer hosting the Zimmerman Thunder. In a game themed “bouncing back” our girls took the our pace of play right at Zimmerman on our home turf setting the tone for the day’s games. Opening up the first half scoring was SO Lilly Johnson receiving a beautiful through ball from 8th grader Danna Garcia-Velazquez. The second goal came from JR Sylvia Linkert receiving a perfectly placed angled through ball to the outside from SO Lilly Johnson. Next was FR Kayla Allison receiving a ball in transition in the midfield and sending it on to JR striker Paige Bauer for the finish. At a 3-0 halftime score it was the Vikings remaining challenges to keep the pace up for the final 40 minutes and grab our first clean sheet of the season. The girls did just that and added 2 more goals coming off of throw-ins from SO Emmie Meyer. The first was by determination & ball skills displayed by SO Lilly Johnson netting her 2nd of the day. The fifth and final goal was a great volley finish by JR Sylvia Linkert ending her day with 2 goals as well. The challenges were not over as SR goalkeeper Emma Mohs made a spectacular one-handed leaping deflection on a free kick by the Thunder in final minute of the game saving the clean sheet. Our defensive backs locked down the midfield and defending third for the majority of the day with a very strong performance from 8th grader Ava Mohs, SO Paris Kopp & JR Leah Romo. All in all the girls did what they set out to accomplish in bouncing back and finishing the game with a clean sheet.

The girls are now 2-4 on the season and focusing on the road ahead, which begins with another conference opponent at home Tuesday. This one is billed as a special night as we give thanks to our teachers on Teacher Appreciation night. It is also a black out with the theme “back in black” as we unveil our new home alternate kit. Come out and support the Vikings girls soccer team this Tuesday!