There’s a driving force behind many players when they take the field.  Most, if not all, take the field hoping to be the best and give themselves a shot at the next level.  Thomas Kinsella, a 2012 graduate of NBAHS, spent three seasons on the field at shortstop, third base, or on the pitcher’s mound.

After graduation, Thomas continued his quest to perform at the highest level.  He went to St. Cloud Tech and Anoka Ramsey before hooking on to the University of Minnesota – Crookston.  He received All-Division honors at Anoka Ramsey.  He was then able to travel for two winters for spring training invitations.  Currently, Thomas works as and assistant operations manager at Lifetime Fitness.

Kinsella has learned a few life lessons from baseball, the first “have patience and never let one thing keep you down.”  He also notes that mistakes are a part of the game, and “mistakes are great opportunities to learn.”  He worked hard to achieve the opportunities on the field, and HS baseball helped him learn what he needed to work on as he progressed into higher competition.  Nothing will take place without putting forth the effort.  “Never stop working hard,” he says, “the weight room is gonna play a HUGE role as you go further in the sport.” 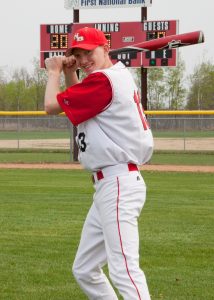 As a Viking, Kinsella tallied two seasons of 17 and 18 Runs Batted In during the 2010 and 2012 seasons en route to the top Career-RBI spot with 51.  He holds two top-5 spots with RBI in a game with 4 versus Columbia Heights, and 5 against Minneapolis Henry.  He’s also tied for 3rd with 13 Career Doubles.

On the mound, Thomas contributed to 6 Career wins, placing him tied for 6th.  He holds spots in strikeouts as well, throwing a 10-K performance against Duluth East in 2011, propelling him to 46 strikeouts that season (t-9th).  Kinsella holds the 4th spot in Career-Strikeouts with 103.

“Always play the game the right way and you’ll be rewarded.”